“Good bread is the most fundamentally satisfying of all foods; and good bread with fresh butter, the greatest of feasts.”

It started with Emile wondering on FB if it was too late to make an apple pie."Never!" I replied. And then Raffa brought up the Danish movie "Adam's Aebler" or "Adam's Apples" in English (which I have yet to google, no clue what it's about. I'm guessing a guy named Adam and a basket of apples. Or at least, that's what I hope). Well, the word "aebler" made me think of "aebleskiver", those Danish puffy pancake balls that have nothing to do with apple slices, even though that is their name.

Anywayyyyy......so I'm sitting at the compu watching my dear friends going into this thing about apple pie, aebleskivers and whatnot, and my mind is running wild in the meantime. Something like this:
"Mmmm....apple pie sounds good. Ann just gave me a big bag of apples, I should make some. But I really would like to make aebleskiver instead, but I don't have the pan I need. Maybe I should make something Danishy with the apples. Like eh...apple bread. With cardamom because that's really Scandinavish. Sort of like anything with feta is Greek. Is that a word, Scandinavish? Probably not. I should look that up on google. Oh, it's supposed to be Scandivanian. That doesn't sound right, like it has something to do with birds. I wonder what birds they have in Scandinavia?" Anyway, you get the idea.

So while the whole world, give or take a few, was glued to the TV watching the BSU game, I was in the kitchen kneading a gorgeous dough for an apple bread. For once, I chose to stay away from the everpresent apple/raisin combination and decided to stick with apples alone, but you can do whatever you like best. It's all good. I usually try to use 1/3 of dehydrated apples, the apple flavor intensifies and some of the moisture from the fresh apples goes towards moistening the dried ones. This also keeps your bread or crust from getting too soggy.

Three hours later the bread was cooling, I had done some laundry, emptied the dish washer, ate dinner and learnt that BSU had won the game (duh!). With a cup of tea and a still warm slice of my apple bread, I was in hog heaven. 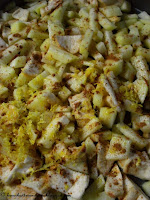 Add the flour, sugar, cardamom and yeast together. Pour in the warm milk and knead for a couple of minutes, then add the salt. Knead until the dough comes together, let it rest for a good four to five minutes, then add the melted butter in, little by little, until the dough is soft and supple. Shape it into a ball, and rest it in an well oiled bowl, covered. Let rise for about 45 minutes. 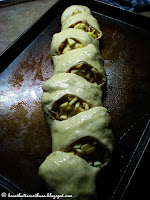 Peel and dice the apples, toss with the sugar, cinnamon, lemon zest and lemon juice. Roll the dough out into a square, add the apples and roll it, jelly-roll style, into a tight sausage. Place the bread roll, seam side down, onto a greased baking sheet. Cover with a damp towel and let rise for another thirty minutes. In the meantime, heat the oven to 375F (200C).

Beat the egg. Brush the bread roll with the egg, sprinkle demarara sugar on top. Now cut three or four horizontal slices in the bread, about halfway down. You can leave it like this, or push each side out as in the picture. Either way is fine.

Bake in the middle of the oven for approximately 30 minutes or until done. Slice and eat warm. 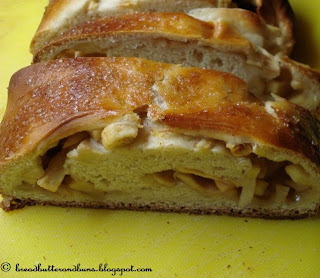 My post is going to Susan's Weekly Yeast Spotting event at Wild Yeast. Check out her blog for some amazing breads!
Posted by Nicole Holten at 2:29 PM
Email ThisBlogThis!Share to TwitterShare to FacebookShare to Pinterest
Labels: Scandinavian Apple Bread